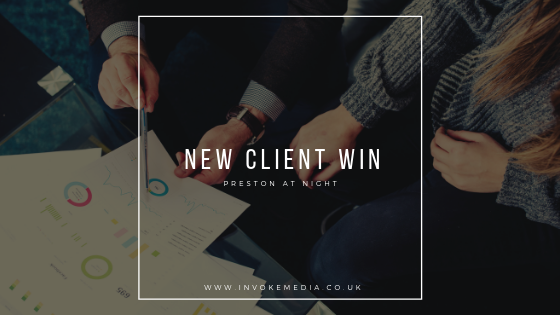 It has been announced that Cotton Court based Invoke Media have secured the digital marketing contract for the Prestfest event on Preston’s Flag Market, for the third year running.

The annual event arranged by Preston Business Improvement District (BID), is one of the many projects & events they operate to stimulate the local economy and engage businesses and consumers alike.

The announcement comes amid a series of high profile wins for Invoke Media, who have recently secured the marketing contract for the San Marco Group of restaurants, and a major national deal with The Think Money Group.

“We operated from Manchester City Centre for a number of years before moving back to my hometown of Preston. The last 12 months have been about expanding our local influence, building our networks and doing outstanding work for local clients.

Whilst we aren’t forgetting about clients in other areas of the northwest and nationally, we certainly buy in to & support the development of our city and local area, and we’re proactively looking to work with local businesses to better their business & our city as a whole. This project is perfect example and opportunity to do just that.”

The sell-out event is held on Preston’s Flag Market

“We’ve got some great marketing & digital talent in Preston, and it’s always difficult to decide who would be the best fit for a project with so much choice.

We engaged Invoke Media this year as a direct result of the great work they’ve done for the previous two events, and on a number of other projects they’ve completed for us.

Jack & his team understand us as an organisation and our objectives. They know events, and they certainly know marketing. We’re looking forward to working with them once again”

2018’s event attracted thousands from across the region

“From a personal perspective this is an amazing opportunity. We’ve marketed these events for the last two years, but this one is especially exciting.

I can directly attribute my route into marketing from when I started DJing, promoting and running dance music events in my teens. I grew up idolising DJs such as David Morales & Felix Da Housecat, and used to listen to Judge Jules every week on BBC Radio 1. Mark Freejack and Chris Hunter are two local heroes in their own right and people who’ve supported myself & many others over the years. It’s an honour to be a part of this project and we won’t disappoint.”

Invoke have also recently completed a project for the BID Preston brand ‘Preston At Night’, rebuilding compliant marketing assets post-GDPR, that will be utilised for the first time in this campaign.

Invoke Media are a marketing consultancy based at Preston’s Cotton Court Business Centre, having moved from their Manchester base in 2018.

Specialising in consultative strategy, paid social advertisements & lead generation, they service a range of local and national clients across both B2B and B2C markets.